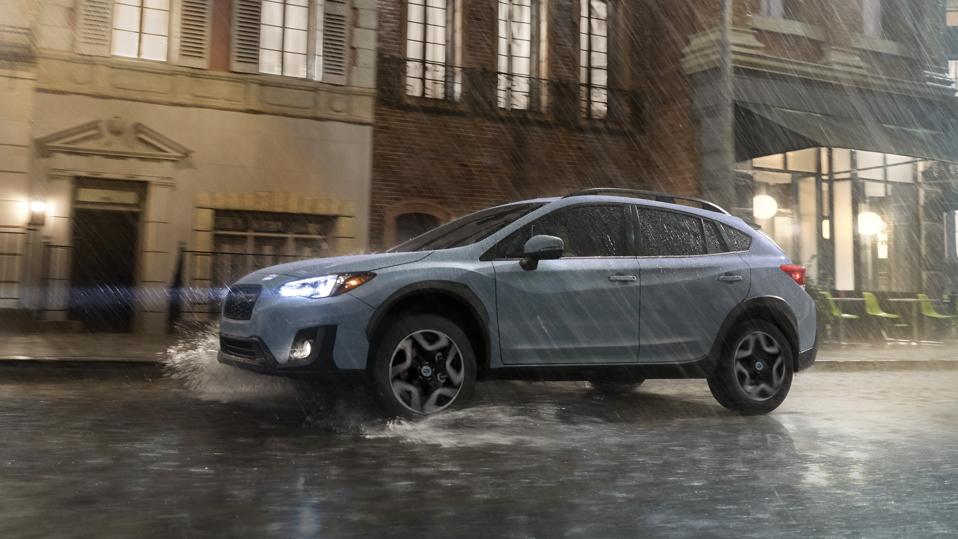 The Subaru Crosstrek costs the least to insure, on average, among the 52 models awarded Top Safety status by the Insurance Institute for Highway Safety.

According to a recent survey conducted by Consumer Reports, auto safety remains a paramount concern among new-vehicle buyers, and with good reason. While traffic fatalities dropped by 2.4 percent last year, 36,560 motorists and/or their passengers lost their lives in motor vehicle crashes.

The Insurance Institute for Highway Safety (IIHS) conducts the most extensive ongoing battery of new vehicle testing with regard to occupant protection and collision avoidance, with the top performing models receiving its Top Safety Pick+ designation. That means they scored “good” in each of the IIHS’ stringent crash tests. These include evaluations for moderate overlap front, driver-side small overlap front, passenger-side small overlap front, and side collisions, and for roof strength and head restraints/seats. They also either come standard with or offer forward auto-braking systems that are able to avoid crashes in tests conducted at both 12 and 25 mph.

Getting top scores in all of those tests is enough to earn a vehicle a Top Safety Pick rating, albeit without the “Plus.” To receive the Full TSP+ designation, a vehicle must be available with headlights that get top marks in the organization’s testing. That’s a critical, but often overlooked element of auto safety. Nearly half of all fatal crashes in the U.S. occur in the dark, and more than a quarter occur on unlit roads.

One would expect to pay less for auto insurance by driving a vehicle that’s loaded with features that reduce the likelihood of getting into a wreck, but that’s not necessarily the case. “One thing to keep in mind is that while sophisticated vehicle safety features are considered a bonus by insurance companies, they can also adversely affect insurance costs,” says Michelle Megna, managing editor of CarInsurance.com. “For instance, the cameras, sensors and computer parts within newer vehicles can potentially break with even the slightest fender bender, raising repair costs. Since no one wants to skimp on safety, it’s important consumers also look at other areas within their control to keep premiums low.” That means shopping for a vehicle that’s otherwise inherently cheaper to insure than others.

To that end, the experts at CarInsurance.com have determined which of the models that ranked highest in the IIHS tests command the lowest average car insurance rates. Many of them, especially small and midsize models, cost less to cover than the national average of $1,812. Generally, vehicles that are the least expensive to purchase, tend to be driven gently, and are the cheapest to repair after a crash will cost less to insure than will high-end luxury cars that cost a fortune to fix, and red-hot sport coupes and convertibles that beg to be piloted aggressively.

Here’s a quick review of the models in vehicle segments that had more than one Top Safety Pick+ entry that CarInsurance.com says are the cheapest to insure, with their average annual rates noted:

CarInsurance.com based its rankings on the IIHS Top Safety Picks + list, using the most expensive trim levels for each make and model. Average rates were calculated from major carriers, assuming an average driver with a clean driving record and good credit, basic liability coverage, uninsured motorist coverage, and a $500 deductible for comprehensive and collision coverage.

Your rates may not reflect the above averages, however. In addition to the make and model of vehicle driven, insurance premiums are based on an owner’s personal profile, including gender (men pay more), age (teens get the highest rates), credit history (higher scores mean cheaper premiums), address (costlier bills for big-city dwellers), miles driven (fewer is better), and especially one’s driving record (accidents and/or moving violations will cost you). Also, auto insurance premiums can vary significantly from one carrier to another depending on a given motorist’s risk factors, so it always pays to shop around to find the lowest rates.