Skip to the content
Home > Insurance Blog > Not sure what your renters insurance covers? You’re not alone

Not sure what your renters insurance covers? You’re not alone

A May survey of 894 people conducted online by Assurant, a New York-based provider of property and casualty insurance coverage, found a number of misconceptions about renters policies.

“Having [knowledge] gaps isn’t surprising but the extent to which people are unaware is definitely surprising,” said Steve Hein, senior vice president of Multifamily Housing at Assurant.The survey found that 81% of respondents with insurance didn’t know that a rug ruined by an overflowing toilet is covered, while 84% were unaware that a guest tripping and breaking ankle in their apartment is also covered. In addition, 57% didn’t know renters insurance will cover temporary housing if a home becomes uninhabitable due to a fire in a neighbor’s apartment. 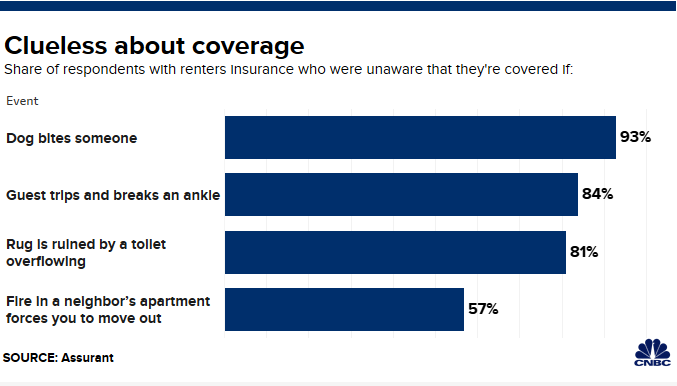 There were also misconceptions about cost. Assurant found that 51% of respondents without renters insurance do not know its average cost, which is about $16 month, according to consumer-spending data site ValuePenguin.

Here’s some steps to take to get the most out of your policy.

If you’re responsible for a fire or leak in your apartment, you don’t want to be on the hook for the bill.

Liability insurance, which can protect you from claims like personal injury and property damage, should be a high priority and can be relatively inexpensive, according to certified financial planner Scott Frank, founder of Stone Steps Financial in Encinitas, California.

Renters and homeowners insurance typically covers liability only up to a certain amount.

“If we cause an accident, we want to make sure people get compensated as they need to,” he added. “We don’t want to work for the next 20 years to repay them.”

Keep track of what you have If disaster strikes and you lose items that are important to you, you want to be able to prove that you owned them.

“Take pictures of things that, if the house burned down, you would be devastated to lose,” Frank said.

This can become important when you file a claim for damaged or stolen property and you want to be compensated for your loss as soon as possible.

Insurance is all about resiliency for people. The whole reason we have it is because it’s a very low probability of something happening, but a really high magnitude in our lives.

Frank recommends taking detailed photos. For example, if you own a laptop, snap a picture of its serial number.

It can also come in handy when you’re trying to remember what you own, Frank said. If you photograph the inside of your kitchen drawers, you won’t forget about any items that were placed there.

“Try and make it easy for yourself ahead of time,” Frank said.

If you just made a big purchase, such as an engagement ring, make sure it’s covered in your policy. If it’s not, get a rider.

A rider is an addition you can tack on if your original policy is inadequate. If you bought an engagement ring for $5,000, but your policy only covers up to $1,000 worth of stolen jewelry, you will need a rider to ensure it’s covered.

This includes adding coverage for storage units. Many policies extend 10% of personal property insurance to other locations, Frank said, so “if you have a lot of valuable items in a storage unit, you want to make sure that is covered.”

Riders can also be added for certain perils — such as an earthquake or flood — that aren’t covered in your original policy. Even if there is a small chance of them happening, the effect could be devastating if they do.

“Insurance is all about resiliency for people,” Frank said. “The whole reason we have it is because it’s a very low probability of something happening, but a really high magnitude in our lives.”

Frank recommends reviewing your policy every couple of years because you might be paying more than you need to, and there might be better deals out there.

You can sometimes find bundle deals, such as auto insurance and renters insurance together.

“It’s nice every once in a while to look up and speak to another provider to get pricing quotes,” Frank said. “Because you may find you can save, and have similar amounts of coverage.”